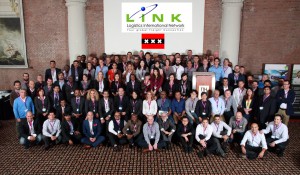 From October 18th till October 22nd the L.I.N.K. Global Network Annual Global Meeting was held in Amsterdam. With an attendance of 59 out 62 members the turn up was really high, as is common with the L.I.N.K. AGM’s. All members find it important to meet the partners of other countries at least once a year to discuss business, as well as the regional economic developments.

A cocktail party at Sunday evening was the official kick off, followed by a general all day meeting on Monday, whereby all relevant topics and developments concerning our network were discussed. On Monday evening all partners were invited by CyberFreight to attend the hosting dinner in the most beautiful beach-restaurant in the Netherlands: Thalassa 18 in Zandvoort, owned and operated by Huig Molenaar.

The following two days were both scheduled for bilaterals, where ongoing business as well as opportunities were discussed between partners. It was no surprise these meetings extended to the late hours in the hotel bar. On Thursday morning the 2015 AGM was closed by the selection and voting for 3 new L.I.N.K. board-members. CyberFreight’s Jacques Vandenberg was not re-electable after his 2 years term as Chairman ended. After 4 years as acting Chairman, he felt it was time for other members to step in for alternative influences and visions on all ins and outs related to the network. This also allows Jacques to focus on all new and exciting developments within CyberFreight in the years ahead of us.

During this AGM, three new members have been assigned. We have new partners in Chili, Morocco and Tanzania. The LINK network is still expanding, but never with any compromise on the exclusivity (1 country, 1 member) as well as the selection criteria where new partners must have a strong focus on proper communication, knowledge of the local market and customs regulations, financial stability, competitiveness and a high customer focus.

With CyberFreight as the host, this AGM 2015 was a great success, whereby all partners also enjoyed the many point of interest and entertainment venues Amsterdam has to offer.
Next year the AGM will be held in London, UK and for the 2017 AGM Greece will be the host on the beautiful island of Mykonos.

Back to news overview

Various storage locations at Schiphol airport & the port of Rotterdam. Management via e-stock...

Our certified and widely experienced declarants can help and advise you ...

Environmentally friendly transport including LCL shipments, arrival in the Netherlands ...

CyberFreight takes care of the complete shipment to the desired final destination ...

Extensive experience with complex freight requests. With our wide network we can act fast ...

Import and export with fast movement to our own customs warehouse ...

For your pharma shipment by sea freight, view our very complete range of services ...

Last Mile Distribution according to full GDP qualification and POD via our portal ...

Full GDP delivery and collection of Groupage or Express? View our options ...

Our in-house experts will fully compliant take care of your pharma shipments ...

Our Cleanroom is used for physical customs checks ...

This website uses cookies to improve your experience while you navigate through the website. Out of these, the cookies that are categorized as necessary are stored on your browser as they are essential for the working of basic functionalities of the website. We also use third-party cookies that help us analyze and understand how you use this website. These cookies will be stored in your browser only with your consent. You also have the option to opt-out of these cookies. But opting out of some of these cookies may affect your browsing experience.
Necessary Always Enabled
Necessary cookies are absolutely essential for the website to function properly. This category only includes cookies that ensures basic functionalities and security features of the website. These cookies do not store any personal information.
Non-necessary
Any cookies that may not be particularly necessary for the website to function and is used specifically to collect user personal data via analytics, ads, other embedded contents are termed as non-necessary cookies. It is mandatory to procure user consent prior to running these cookies on your website.
SAVE & ACCEPT